Q:  What do you get when you combine “that time of the month” with PayDay, and factor in a recent $$$-hemorrhaging move plus the holiday season fast approaching?

I blame this man, really.

I picked up his book last week while on a pre-PayDay mini-bender.   If you don’t have a general resource cookbook that you find useful, buy this one.  He has EVERYTHING in this book.
“Everything” includes a recipe for no-knead bread (which I first learned about from Chef Michael Smith).  I started it last night, and by this morning when I went to work it looked like this:

However, it turns out that to make this bread in the best possible way, one requires covered pans (something like a Dutch oven).  Now, even though I have a Dutch over, I decided that today I needed some fancy yuppie-style ones, so headed over to Winners on the morning smoke break.

Le Creuset and all… for a third of the price.  Man, I’ve achieved true yuppiedom now (even though I’m not really all that “y” anymore.  Sigh.) 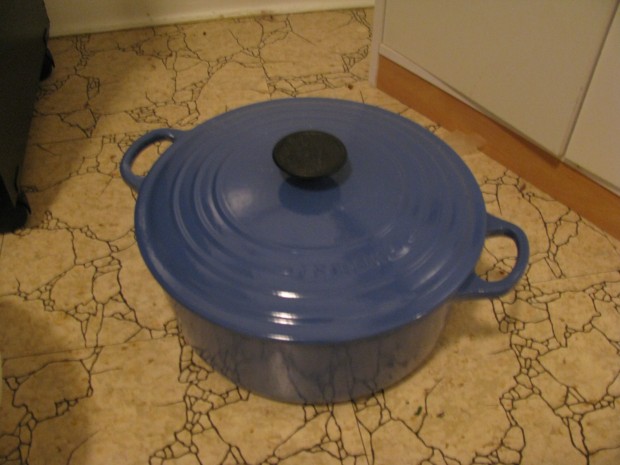 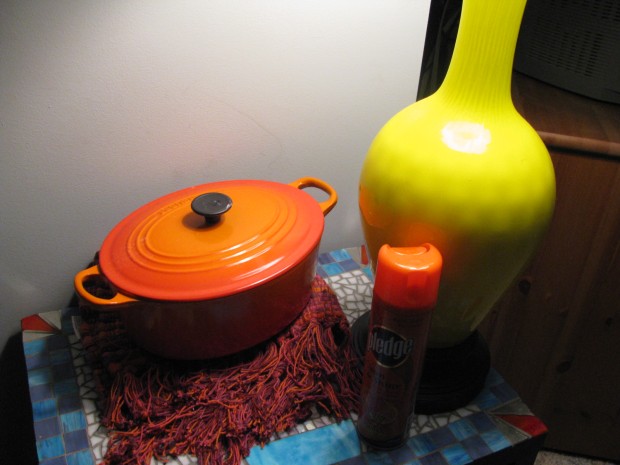 I thought photographing it on this table with the matching can of Pledge was a nice touch.  Plus, it might make you think that we’re actually doing some cleaning around here.  Heh heh.

And, just in case you doubted the real credentials of this pot:

And – I bought some (almost) matching silicone oven gloves!

Until I saw some other baking ingredients, of course, and then decided that I just had to try to make a yeasted coffee cake from Mr. Bittman’s magnus opus.    Here it is in progress: 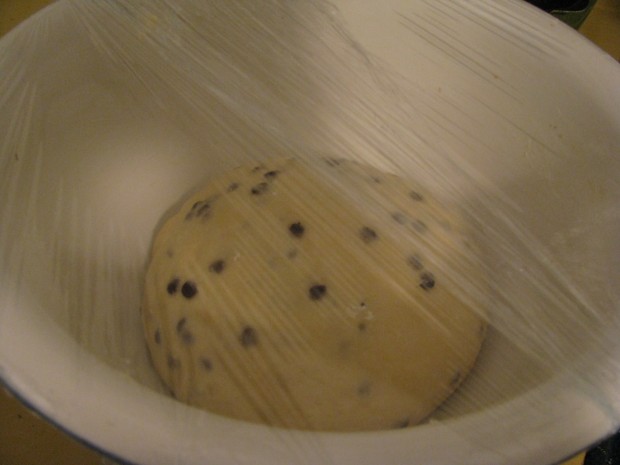 I must warn that I’m sure this is doomed to fail.  Why?

(a) I can’t bake.  I’ve never had any luck working with yeast.

(b) I think I broke my food processor mixing the dough for this.  Smoke coming out the back of it is not a guid sign, right?

(c) I’m fooling around with the recipe, which probably isn’t the swiftest idea given that I haven’t the slightest idea about how to deal with yeast.

Oh well. If I don’t post here tomorrow, you know the whole thing went over the balcony.

In the meantime, I did have some baking success already this evening with dinner: chicken pot pie! 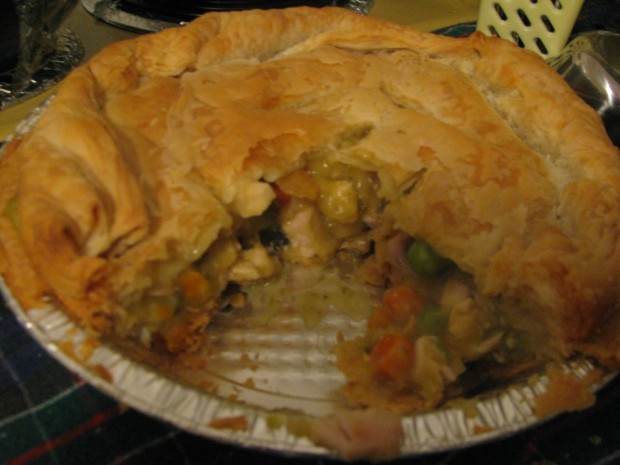 Alas, I can’t tell a lie.  I did not make the pastry. However, I did an over-the-top thing – combining pie crust and puff pastry in the same recipe!

And it was GUID.

For dessert?  Did I mention that I now live about 100 metres away from a Dairy Queen?  And that they have a 1/2 price cake sale for the month of December?

PS.  Oh, let’s not mention my other food acquisitions today…

10 thoughts on “that time of the… ahem, of December”