I’m well and truly off the wagon now, folks. Yup. Yesterday, I made yet another trip to one of the local Houses of Worship – on the pretext that I needed one of these:

For some reason I keep losing these. This is probably my fourth this year. I’m sure that one of these days I’m going to bump accidentally into a secret portal in my apartment and be faced with a whole pile of single socks, good wooden coat hangers (as opposed to crap wire ones from the dry cleaners’) and knitting needle measuring ruler thingies, all pointing and laughing at me.

So, of course I decided today that I was in huge need for one of these $3 thingamabobs. But did I go back to Romni, which is just down the street from my workplace? Hell, no.

It certainly wasn’t because Lettuce Knit (quite a hike away from my office, in the Kensington Market) is the only yarn shop in the city that carried Blue Moon Fiber Arts yarn. No sirree Bob. Nope.

But, really, how could I resist! 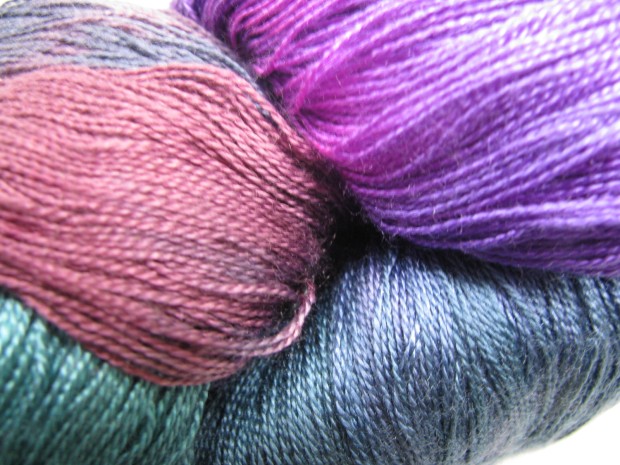 Oh – and while I was there I had to pick up a lonely little skein of Bobby Blue (as in “No Sirree Bob”, I guess!) Malabrigo laceweight as well:

But I don’t feel so bad about this – because Amy told me: “Malabrigo doesn’t count”. I’m a very gullible person, and I do hope that she has not led me down the garden path toward bankruptcy….

What makes me feel a bit better about all of this is that I’m apparently not the only one who’s getting up to hijinks this week, apparently – and mine are far cheaper than some. You see, this week the Calgary Stampede is taking place. Now, I’ve never been to Calgary but if you have ever lived in Canada and watched any news programme during the month of July, you’ll know all about this WestFest, where all the oil millionaires/billionaires, politicians and other high rollers turn up to watch some rodeo and eat some high-priced beef.

Now, according to CTV News the other evening, that’s not all these guys do. They actually had a segment on the late news discussing how some of these guys also come to gamble and pick up women. They even quoted a pro female saying it was by far the most lucrative week of the year.

I think they did, anyway. You see, I cannot find this story anywhere on their website – I do remember seeing it though, if only because it really really hurts to spit Vex alcopop out your nose when you start laughing with your mouth full. JJ confirms that this was on.

But instead, all I could find on the CTV website was this: Calgary drops suits for Stetsons during Stampede.

I mean, really – let’s face it, these prime ministers must get up to all sorts of nonsense when they’re on the road – and especially when they get to dress up in cowboy drag. Why else would Pierre Trudeau have been showing his stuff there, for example? 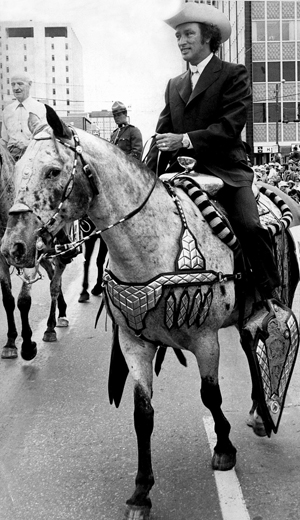 Now, as for Jean Chretien, I’m not so sure:

Now, I must say that I really like his wife’s cowboy boots – in fact, I want them. But what was up with those puddlejumper jeans, Jean?!? Did the Prime Minsterial budget not extend to a pair of jeans that actually fit, or did you spend it all on the 10 gallon hat?!?

And then there’s always my favourite, the Right Honourable Stephen Harper, our current fearless leader who allows Geo. Bush to address him as though they’re hanging out on a street corner somewhere (I mean, really. “Yo, Harper“??? WTF???? When he pulled this stunt a few years back with Tony Blair, the British were reportedly offended. And, to my view, the British were right.) and simply giggles and blushes smiles. I’m not so sure, however, that it’s wild women he’s after…

I mean, first he poses for this cheesecake photo back in 2005:

Is that lipstick he’s wearing?!? I mean, really. Doesn’t he look as though he just stepped off the cover of a Village People LP?

So, what’s up with the pink shirt?? Well, apparently he said it was to show support for fundraising efforts for breast cancer. Well, that’s heartwarming and all, Steve – but if you really cared about people who suffer from breast cancer (or cancer of any kind, for that matter), you wouldn’t be doing your bit to destroy universal health care as we know it. But I’m ranting digressing now.

Suffice it to say that, sported by an arch-convervative like Harper, the colour pink speaks volumes. But this year, his image consultants have he’s decided to go butch: 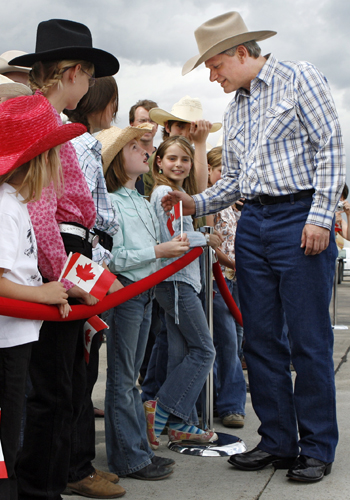 Now, I haven’t been in a women’s bar for a while now – but the last time I went to one, this was pretty much the uniform.

So, Steve, I’ll be waiting with baited breath to see what cute little outfit you come up with for next year’s Stampede! How about something like this, for example? 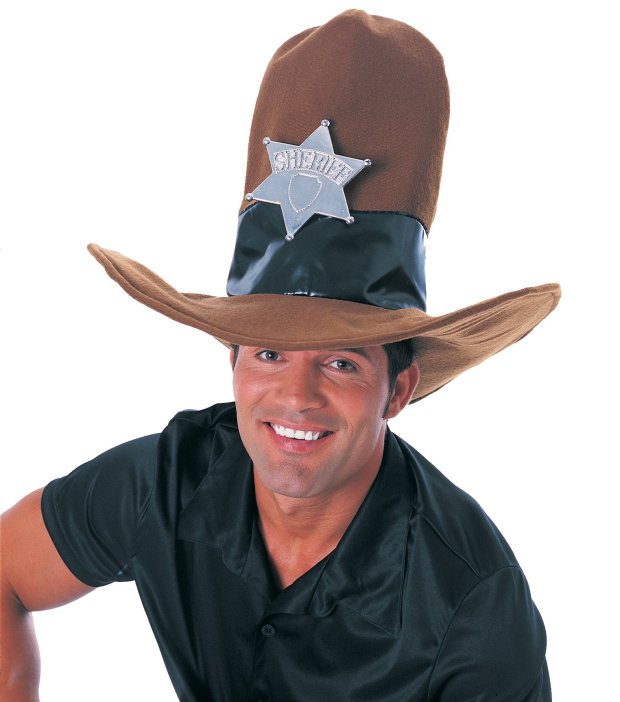 6 thoughts on “stampeding into shamelessness”