For those of you who do not live near me and have not been subjected to seeing the man’s face on your television screens about 25 times a night or reading his open letters in all the newspapers, Michael McCain (no relation to the guy south of the border who is running for president, as far as I know) is the President and CEO of Maple Leaf Foods.  As such, he is currently busy dodging flak dealing with the fact that several people have died eating meat from the Maple Leaf factory which had been tainted with listeriosis.

I do hope the families who have lost people find your recent messaging about the bacteria crisis which arose at your plant 97B comforting. For my part, I find Mr. McCain’s “heartfelt” expressions of sympathy combined with legal @$$-covering to be disingeneous and… well, rather annoying. A prime example of this new “we’re a corporation but we still care about YOU” trend.

Given all of the talk in the media that it’s going to cost Maple Leaf at least $20million in reimbursements for product recall and other expenses related to this crisis, I was flabbergasted to see on CTV News last evening that experts predict there will be no long-lasting damage to you at Maple Leaf – partly, apparently, because of your crisis-management skills.

Colour me stupid, but I really don’t begin to understand how the world of high finance works. However, I do understand that most Canadians will not be buying anything made by Maple Leaf any time soon because of fears (whether justified or not) of contamination – and so it didn’t make sense to me that Maple Leaf would not take a hit.

Until, that is, I had a look at your website (http://www.mapleleaf.ca/Aboutus/default.aspx) and learned that you have some other holdings.   And – lo and behold! – one of those holdings is J.M. Schneider’s Foods!

If I sound catty, it’s because I detest all those Schneider’s Ads featuring an actor playing long-dead Old Man Schneider yakking on about how really Schneider’s is just like a family business, bla bla bla. However, I had also assumed that Schneider’s was actually your biggest competitor – given that they seem to sell the identical line of meats, bacon, frozen foods, etc. to you guys.  (Oh – and it was also interesting to learn that you own Dempster’s breads – so you’ve really got the baloney sandwich market covered here in Canada, eh?)

But instead, I guess that many of those people who want cold cuts but do not want to buy from Maple Leaf any more will end up changing to Schneider’s instead – especially in smaller centres where they lack the choice of goods that I enjoy here in Toronto.

So – and again, I’m rather daft about things financial – it seems to me that you might well end up with more money in your collective pockets as a result of this food scare at Maple Leaf.  But then again, I’m no economist.

I am, however, someone with a relatively high bullshit meter.   So, phrases like the following, which I read in Mr. McCain’s open letter to the world his customers this morning, make me see red:

This is the toughest situation we’ve faced in 100 years as a company.  We know this has shaken your confidence in us.  I commit to you that our actions are guided by putting your interests first.

As long as “your interests” involve tossing out everything in the deep freeze from Maple Leaf and replacing it with Schneider’s, I guess, eh? 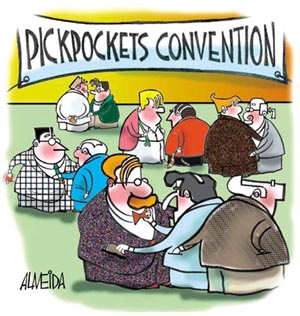 Well, my interest now officially include never buying anything produced by your various outfits again, quite frankly – not because of the bacteria but because I find your approach to the situation rather cynical and calculated.  This might mean I never get to eat cold cuts or bacon again, given that you seem to control the supply. Given my fondness for bacon in large quantities, this will be not be easy. But I will survive, I’m sure.

And, I would suggest that you, Mr. McCain, amend your little “open letter” to make the link between you and Schneiders a tad more clear. Something like “Our biggest competitor, whom we own, will be happy to take care of your ongoing food needs” would suffice.